OYSHI OYSHI! Meaning delicious in Japan also explains how amazing the Oyster festival is! How often are you able to buy a huge bag of oysters, some rice triangles, hot dogs, and corn on the cob to grill for yourself for less than 20 bucks? The oysters themselves would be almost $40 in the U.S. Out here in Japan they are collected by the bucket load so no need to worry.

At the Kashima harbor park we bought our oysters, some beer, and the other foods mentioned above and we had ourselves a delightful afternoon cooking oysters on the grill, listening while they sizzle and when they finally pop they are ready to be pried open and eaten. I was wearing protective gloves because the coals become very hot and oyster shells are no joke in the heat. We munched for a good two hours on oysters, corn, and rice triangles. The Japanese were loving it! The oyster festival lasts the entire month of November in Sasebo and we had been so busy we barely made it the last weekend they were holding it. Lucky us! If I’m in town next year I’ll be back and that’s a fact. 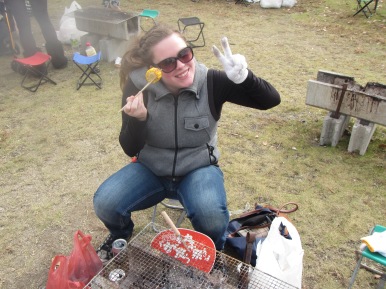 Wow! We just got back from a two week underway and boy was it jam packed with event after event. My newest story was quite the adventure and I am very glad to be sharing it. When we left, I knew that we were going to meet up with three Japanese ships and one other U.S. ship (the Donald Cook) in the middle of the Atlantic, and I was pretty excited. In preparation the navigator had all of the Junior Officer’s (JO’s) convene in the wardroom for maneuvering board training.

The next morning we were underway. I was the conning officer and things went smoothly. When we got out to the Atlantic and met up with the Japanese ships, there was word that some of the JO’s were going to be able to get boated over via Japanese small boat and spend the day on board the ships. I had no thoughts at all that I would be picked because I don’t have a chief and my first class that helps me run the show went on leave to move houses. My division kept telling me “watch ma’am, their going to pick you, we just know it.” I did not believe them.

But they were right! I was picked and P and I went together to the Kashima where we met some very interesting people. The beginning of the trip did not start off well to say the least. Our ship was dead in the water for the transfer because the Japanese version of the small boat was quite different from our version. We disembarked via the flight deck using a jacob’s ladder. I was the first one to climb down and the people in the Japanese small boat did not understand that they needed to hold on to the ladder in order for me to get safely down it so just when I was about to get into the boat, the ladder slipped out and I went crashing into the side of my own freaking ship and I was dangling on a ladder that went to the ocean. It was a little to scary, but I didn’t have time to think I just needed to react.

Now the rope ladder was in between my ship and the Japanese small boat and a rolling wave came up, of course. I frantically tried to climb up the ladder a few feet and my right leg did not make it. The Japanese small boat smashed into my leg and my leg smashed into the side of the ship and I screamed at the top of my lungs. When I did get down into the boat I didn’t think I was going to be able to walk but after a few minutes the pain subsided, and I decided to stick it out.

When we got to their ship they immediately took us up to the bridge to meet the captain and the admiral that was onboard for the world tour. Everything was so clean. That’s all I could think, after walking down the first p-way. Instead of having one ladder well on each side of the ship they had an ascending and descending ladder well’s side by side. That made for easy transiting. After we were introduced to the captain and the admiral we went to the wardroom to put our things down.

This is when I found out that 2 midshipmen were on the ship from the academy and they were riding for two weeks time. This was very good for me because they spoke Japanese pretty fluently and became our translators throughout the day. We took a tour and saw the ships layout. They have an elaborate apartment onboard for the emperor  and we tried to convince our tour guide to take us past the gold rope but he was unable to. boo. I really wanted to see it.

After the tour we headed to the bridge because they were just about to start Divtacs and we wanted to see it from their angle and of course see how efficient they were at taking stations. While there, I took lots of pictures and got some good ones of my ship in the water off of our starboard bow. They had the Japanese helo in the air and it was taking pictures of the formations. The captain of the Kashima got very annoyed because they didn’t want anyone outside for the pictures, but the captain of my ship was out on the bridge wing with a group of people and would not go inside. Patrick and I laughed a whole lot about this.

After the Divtacs it was time for lunch, what I had been waiting for this the whole time. Apparently a Friday in Japan is similar to slider Wednesday in the U.S. because they have rice and curry every Friday. I piled my tray high and took chopsticks plus a spoon, just in case. The food was pretty good. We had tea with our meal, which was very refreshing and I will say that the Japanese really do know how to cook some great rice., as if there would be any doubt.

While eating I asked a guy sitting across from me what kind of music he listens to. One of the midshipmen translated for me. He said that he liked American music. I asked him which kind. He said that his favorites were Lady Gaga and Slipnot. What a combination. I of course started singing raa raaa rra a aaaa “Bad Romance” and he started bouncing to the beat. Apparently they had stopped in D.C. as part of their world tour adventure, and half the ship had bought the new Lady Gaga C.D. We were laughing so hard and singing lady gaga songs at lunch. It was quite a show.

I enjoyed my entire day on board. I learned how to play Zero, caught up on the latest Japanese fashion with some of the girls, and learned about a great comic book read, saw their onboard symphony band practice, and even head banged to some Slipnot.

Going home, or back to my ship should I say, we flew by helo instead of by taking the small boat. It was a great time!

WHAT ARE YOU THINKING?