This is where I am going to recap our most epic night in Bahrain. This would be the night we hailed the our new XO. For those of you who don’t know what a hail and farewell is, I will explain. These are mandatory wardroom (all officer) functions in which the wardroom gathers together and for a hail, introduces you to the officers and you to them and for a farewell, your time on board is talked about and you normal receive a few silly gifts. Hail’s aren’t that great because no one really knows you, but farewell’s are hilarious. And also awkward if no one liked you… Haha.

So let me fill you in about a little problem that Bahrain imposed on us and we had to work around. They do not sell any alcohol in Bahrain, you can only buy it at the restaurants that are authorized to sell it, which are few and far between, and on the base at the NEX because that’s considered to be America. But here’s the thing, the navy is very concerned with drunken sailors in Bahrain, so you actually get a card once you arrive which starts collecting points on it for how many days you’ve been stationed over there.  These points in turn authorize you to buy so much alcohol.

Our plans for the hail were very limited since we were still restricted to the base, so after doing some research we found a volleyball court with a patio, picnic tables, and this bad ass grille that was awesome. The only thing we were missing was our inability to buy alcohol. It was time to put our heads together on this one.

We are a bunch of naval officer’s so we should be able to make this happen right? Well indeed we did. Shacker, one of the pilots, took the bus to the base in the morning, mostly because he’s a pilot (they never work, haha), and he went straight to the main building where the XO and CO of the base work. He brought a letter from our captain that requested 7 cases of beer for 30 people and asked the XO to approve and sign it so we would have authorization to buy the alcohol at the NEX.

At first we were going to write the number in cans which would be 168, but that just looked like a ridiculous amount of beers, so writing the case number put us in the tens, perfect. The XO did sign it and Shacker ran back to the ship holding it out like he just won a tour of Willy Wonka’s Chocolate factory. We were ecstatic!

Trying to get that volleyball mentality in place.

Putting it all back in the carts.

Cooler is ready to go! 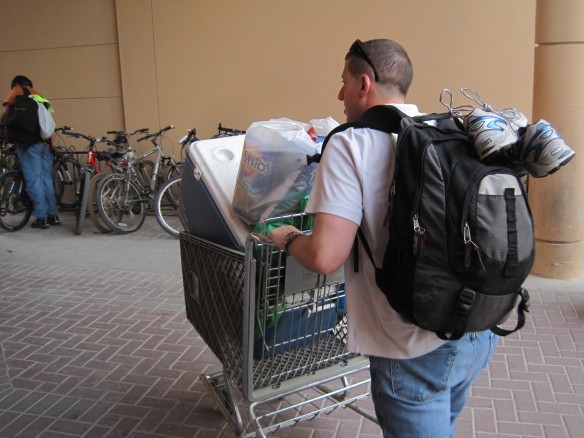 I forgot to tell you that I had been promoted to the BULL ensign, which is the most senior ensign onboard, so I get to boss people around, and I was helping set up for the hail so a group of us left early to go buy all of our supplies… And the beer. Airboss, CHENG, Shacker, Heather my roommate, and Elyse all caught a van with 2 huge coolers from the ship and we were taken straight to the front gate of the base where the NEX is. We did all of our shopping and piled everything into 2 shopping carts, then we took it all outside, unpacked it, put all of the beers on ice in the cooler and repackaged everything, then proceeded to push the carts all the way to the volleyball courts to set up for the BBQ. It was hilarious. We were just pushing buggy’s down the sidewalk and we had tons of beer and everyone was inquiring where we got all the beer? We laughed the whole way and just as we were almost arriving the Captain walked around the corner, he had just got off the bus and he just shook his head at us because we were a sight to see.

The drinking began immediately. We started setting up the grill and all of the food while we waited for everyone else to arrive. MPA was in love with the grill, which was really very nice. It was huge and had all kinds of counter space, with marble, and a sink with running water. We were grilling in no time and I had bought brats, which I absolutely love and had not had all summer long. They were so good!

When all of the pilots arrived they went to change, which was odd. They had threatened us before but we were not prepared for the ridiculousness that ensued. They all walked out together, slow mo, with jeans, white T-shirts, dog tags, and aviators on, just like top gun. It was absolutely hilarious, but not after 5 games of volleyball in 110 degree heat. They regretted the jeans decision very quickly. 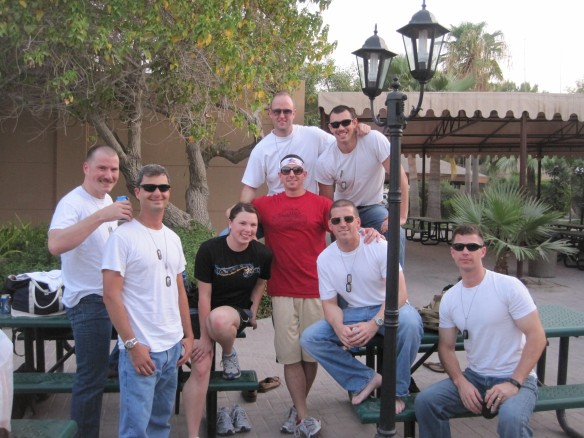 All the pilots with their Top Gun-like appearance and then PB and I.

We were blasting music, playing volleyball, grilling out and just enjoying the evening, and enjoy it we did. It’s nice to relax every once in a while. We partied very hard and diligently tried to finish off all of the beer that we had purchased. What we couldn’t finish we put on the counter and the Bahrain workers were already outside bagging it up before we even left.

H and I five minutes after arriving, right before the 110 degree weather ruined our appearances! 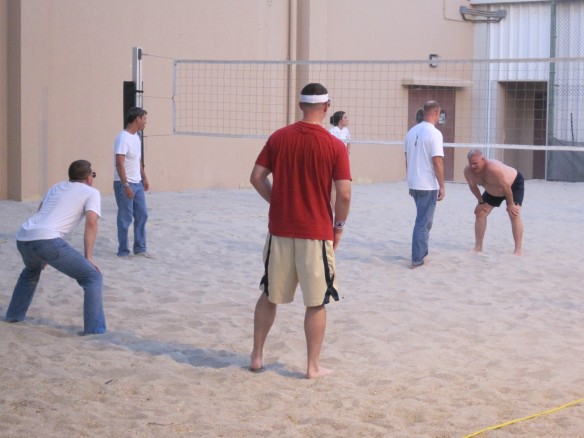 We all went back and headed straight for the wardroom where we just ate even more food and laughed obnoxiously. I didn’t make it very much longer after that and it was by far my worst hangover on this deployment.

The next night is the night I got my new nickname, which is quite embarrassing but I’ll tell you anyway because it is funny. I did not go out, I can assure you of that. I had duty so I couldn’t leave the ship. That evening Airboss and Cheng came back from the base and they were banging on H and my door, telling us to come hang out in the wardroom with Shacker and Dieter, two of the other pilots. H and I did but I was still very tired and wanted to go to bed. I was standing there by the door laughing about something with everyone and I had a gas bubble, which I was silently trying to get rid of. I definitely did and I definitely got caught. It wasn’t very silent. Airboss jumped up and started rattling the drawers trying to imitate me. I was just laughing at this point because what else could I do right? I mean you’re in the company of people 24/7 for 7 straight months, your bound to get caught sometime right?

Well instead of calling me ASWO, they call me Ass-Whoa! And now they just call me Whoa! But they always say it really obnoxiously. The story spread quickly, I’m almost positive that the XO and CO know now. It’s the only time I’ve been caught this deployment and now I have a new name because of it. Boys are so stupid.

This concludes my extended vacation in Bahrain. More from the high seas and my adventures as Officer of the Deck to come shortly.

Tell me your thoughts! Cancel reply